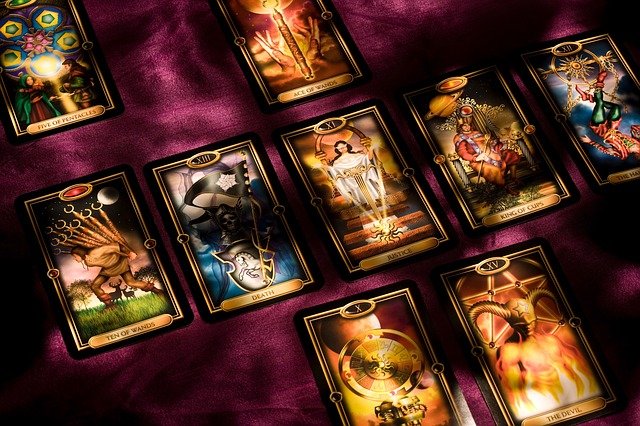 What is the Secret Tarot?

The Secret Tarot is a deck of tarot cards, created by Marco Nizzoli and published by Lo Scarabeo. The deck is in the Rider-Waite-Smith tradition and has the standard 78 cards – 22 Major Arcana and 56 Minor Arcana. The suits are Chalices, Swords, Wands, and Knives. And the court cards are Knave, Knight, Queen, and King. The Fool is #0, Strength is #11, and Justice is #8. The cards have been published in Spanish, English, Dutch, German, Italian, and French. The Secret Tarot deck is renowned for its originality, innovation, and artistic value. Marco Nizzoli also created the Dream Enchantress Tarot card deck adorned with his distinctive comic book-style illustrations. The Dream Enchantress Tarot is unique in featuring almost entirely female figures, Even the male characters like the Kings, are wearing female masks.

The beautiful illustrations of Secret Tarot cards depict scenes and costumes from various eras spanning the 19th and 20th century from the Middle Ages to the European Renaissance. Some of the cards feature female nudity. The card images are darker, more erotic, and evocative than other decks. The images have an eclectic fantasy feel that is reminiscent of Mad Max, scientific symbols, mythical creatures, magic, Lord Byron, and Medieval knights! People featured on the cards are dressed (or semi-dressed) in romantic robes, and full evening wear. They seem comfortable and stand in classic heroic poses. As much attention has been paid to the backgrounds as to the figures. The name appropriately reminds us that the tarot cards (particularly the Major Arcana) are set out to show the journey we take in life, and in our discovery through tarot readings of secrets from the past, present, and future.

Another unique feature of the Secret Tarot cards is that they usually come with an accompanying booklet. The brief booklet, written by Nizzoli, outlines the heroic journey of a young traveler. Along the way, there are brief descriptions of Major Arcada in the context of the journey. In the booklet the four suits are four kingdoms – Chalices (cups) is the Kingdom of Pleasure; Swords is the Kingdom of Sorrow; Pentacles is the Kingdom of RIchness, and Wands is the Kingdom of Human Works. This is our journey through life and our journey to self-awareness through tarot readings.

To give you an idea of what makes the Secret Tarot unique, here are a few of the card’s features.

Knight of Pentacles: The cavalier Knight stands facing forward, with his shoulders square looking at the viewer with a knowing half-twisted smile on his lips. Even his dark moody horse is giving you a look with his hooded eyes.

Page of Pentacles: This Page is much more dynamic and charming than in other decks. The gender of the Page is questionable. In the background is a soft yellow sky and cityscape.

Queen of Wands: In the Secret Tarot the Queen of Wands is elegant and minimalist, with an open sky behind her and two delicate green sprouts growing from her wand.

Temperance: In the background is a creature that resembles a white otter. This creature can survive both land and water but retreats into the water (emotions) when it feels threatened.

Strength: The beautiful woman on the Strength card is riding a huge lion through an other-worldly landscape.

Justice: A hooded, robed woman wearing a red cloak and sage-colored dress holds up a sword and the scales of Justice. She is flanked by stone pillars.

Ace of Chalices: The chalice is suspended over candles that appear to be floating in the water. The light from the candles is reflected in the water, and casts a shadow of the chalice on a speckled wall.

Ace of Pentacles: On this card, a hand emerges from a robe that could be mistaken for a cloud. The hand holds a disk with a five-pointed star. In the background is a castle against a golden sky.

Ace of Swords: The sword is driven into a stone and in the background is a yellow-blue sky and airy castles. Figures carved into the stone appear to be birds swallowing fish.

Ace of Wands: A rabbit lies in the shadow of a tree stump and in the background are soft clouds floating in a beautiful sky and a castle in the distance.