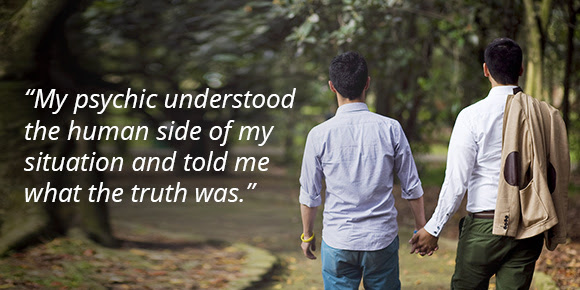 Understanding the human side of your situation

A psychic advisor who truly connects with you can help you get out of the same old cycles, and find new love and hope.
Here’s the story of a man who finally found it within himself to do the spring-cleaning of a lifetime in his heart and let go of his “obsession.”

In his own words:
“I was going through tough times in my love life when I first came across Totem Aion/Kassie. It was a story that had already repeated itself several times in the past with different people; only this time it felt different. It wasn’t just me overreacting and causing unnecessary drama. It was a story about a very special person.

Since my teenage years, I was falling in love with unavailable people. They were either already in a relationship or in the “curious” stage of discovering and exploring their sexuality. This guy was special, because even if seemingly we had little in common, emotionally, we connected instantly to a very deep level. The intensity of the connection was astonishing.

At first I felt nervous to contact a spiritual advisor.

For one, I had never done this before and then was the fact that I thought, at the time, that I would be treated differently than the usual “normal,” straight stories. I then realized that I had already done more than 10 readings with other readers and was not left impressed or satisfied.

This, I believe, was not because I didn’t get the news I desperately wanted to hear, but because I felt like they didn’t connect to my personal situation at all or they gave me generic interpretations and false hopes. Then one day, while browsing Kasamba and I came across Totem Aion’s profile.

Reading on her feedback, all the comments were speaking about how honest and to the point she is. Then I was happy to see Greek between her offered languages, which is my native language, so I decided to give her a chance and went ahead and contacted her directly in Greek.

It was professional, extremely accurate and at the same time she was speaking to me as if we were friends, creating that way a really familiar atmosphere.

In my case, I suffered deeply with this guy who kept coming in and out of my life without taking any particular decision. One moment, he was showing me his most sensitive side, the next he was taking it all back. When we were together, while it felt amazing in the beginning, it always ended up frustrating at the end of the day.

One moment he was so eager to show me around his city, to spend the whole day with me talking, laughing and having a fantastic time. At the next moment he closed off, became sad or nervous, didn’t want to speak at all, making me feel like an invader of his personal space. The impact of those shifts was nerve-wracking.

He made me feel like it was all my fault that our relationship wasn’t working and that I wasn’t worthy.

But I loved him very much, although my friends were all judging me and even made fun of my “obsession”. Kassie was different though. She understood the human side of my difficult situation and only told me what the truth was.

Kassie always left me to decide about my future and psychological health. She didn’t advise me to let him go, even though that seemed the obvious conclusion.

Kassie was kind and didn’t mind answering the same questions more than twice!

This reading I had with Kassie helped me learn that actions speak louder than words. She helped me understand that all people have insecurities and fears, that nobody is excluded from that. She also taught me that the way we treat ourselves is what makes us different to others.

I came to realize that I didn’t want to lose myself in order to be perceived by others as being “strong”. I wanted to be proud of who I am and find a different way to speak up for myself. I have no contact with that guy anymore, I guess I learned my lesson after all this time.

There have been periods of loneliness but also fun periods of occasional flirting and dates. I’m not ready for a new commitment at the moment, but I know I now have a good friend in Kassie who will help me to sort things out.”

This testimonial was based in a real experience with ones of the best tarot card readers.

Have a personal reading with Kassie at Kasamba now