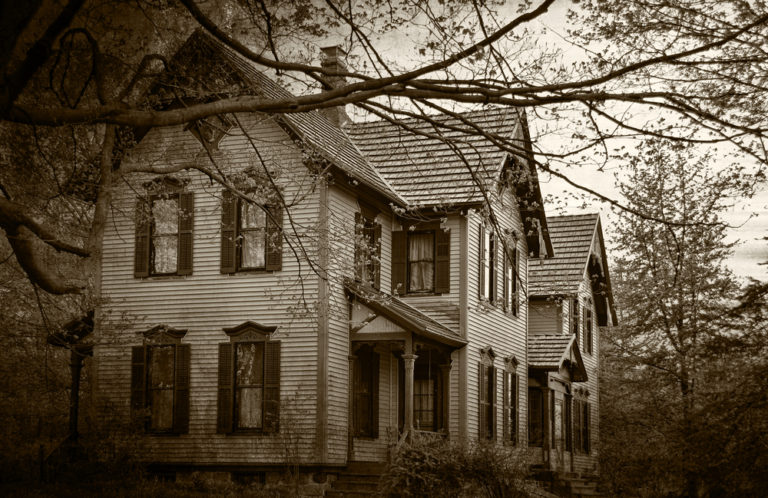 How to Tell if Your House is Haunted?

Do you keep seeing things out of the corner of your eye? Are you sure there was someone watching you sleeping from the end of your bed? Perhaps there are some strange occurrences in your house that you just can’t explain… If you’re wondering how to tell if your house is haunted, you can check this list of tell tale signs.

Sometimes old houses make noises, and yes, sometimes it could just be the pipes banging, mice in the floorboards or a tree brushing against the attic window. But, beyond those more obvious ‘bumps’ in the night, there are other signs that your house might be haunted.

The breeze can be responsible for all kinds of strange activity, from flapping curtains, items falling off shelves or doors slamming. But, sometimes there are things that just can’t be explained by a strong draught.

Furniture being moved, or objects going missing and turning up later in strange places are both indicators that there is something else present in your home. More obvious incidents include items such as books or other heavy objects being flung through the air, strange marks appearing either on the wall, or in condensation on mirrors or windows, or even seeing items levitating or moving of their own accord. And of course, if you see these with your own eyes, this will be the giveaway.

Things being moved is one of the most common signs that a home is haunted. You may either see the resulting movement, or catch something happening right there and then. A one off might indicate natural causes, but if things keep happening frequently, or these things happen in conjunction with other items on this list then you might have a haunted house.

This one can be hard to ignore and can be a very obvious red flag about the presence of a spirit in your home. It might be spotting a strange shadow out of the corner of your eye, or it could be literally seeing the outline of a figure.

Yes, it might be the pipes or perhaps bats in the roof. Or, if you have pipes connecting your property to another, sounds can travel. But if you’ve ruled out the obvious and you still sometimes hear things, there might be a strong case for having a haunted house on your hands.

It’s one of those horror movie tropes, but there is a good reason for it. Both animals such as dogs or cats, and children, are more in tune to the paranormal side of the world.

For animals, it might be that they hiss, growl or cower away from some unseen presence. Again, animals can sometimes react to natural sounds like the rustling of the curtains or the possible sounds of a raccoon in the crawlspace. But you know your pet better than anyone, so if you think they’re acting strangely it may have something to do with unexplained activity.

In their innocence, children too can often be a first clue that you have a haunted house. If you hear them talking as if they’re having a conversation, or if they tell you they saw somebody unfamiliar, ask them for more details. It could be an imaginary friend, as many kids have them.

But if they’re asking strange questions, or they seem to have some new knowledge about the property and you don’t know where they got it from, it might be a clue.

You might experience a combination of these phenomena listed above, which will usually be the strongest indicator of a haunted house. In conjunction with these, you might also find a mystery liquid in places where you wouldn’t expect it.

Ectoplasm is often linked to the presence of spirits or ghosts, and is often said to appear after their interactions with the physical world. So, what is ectoplasm? This naturally occurring liquid is actually found on amoebas, but has been found in places like haunted homes and at seances.

Yes, dodgy mediums in the late 19th and early 20th century used to fake ectoplasm to make their seances appear more real, often using material or cloth. However, ectoplasm is often considered to be a slightly viscous liquid, either transparent or off white.

We don’t always know what happened in our homes before we moved in, or on the land where it’s built. Ghosts are often considered to be the traumatized spirits of the long dead, perhaps those who can’t find the peace they need on earth to be able to go to the afterlife. So if you’re experiencing paranormal activity in your home, look into the history of the property or the land around it.

Murder scenes, hospitals and asylums, burial grounds, battlefields and other scenes of trauma could all be the cause of a spiritual malaise. Perhaps these souls met a violent or unpleasant end, maybe they didn’t get to say goodbye to loved ones, or perhaps their rest has been disturbed by your arrival.

A dark past alongside the activity detailed above can be the proof you need to tell if your house is haunted. But how can you find out? Looking into public records at your local library, especially old newspapers or death certificates is a good place to start. If you think your home might stand on what once was another building, you can ask at your local town planning office.

What to do if you have a haunted house

In most cases, ghosts and spirits are looking for ways to communicate with the living, which usually comes across as unexplained phenomena. Things moving, whispering, noises or other eerie happenings can all just be signs that the spirit is trying to communicate with you.

If you think your house is haunted, it’s strongly advised that you contact a professional medium to help communicate with the spirit world. These trained professionals will know how to contact the ‘other side’ and how to speak to them and interpret their messages.