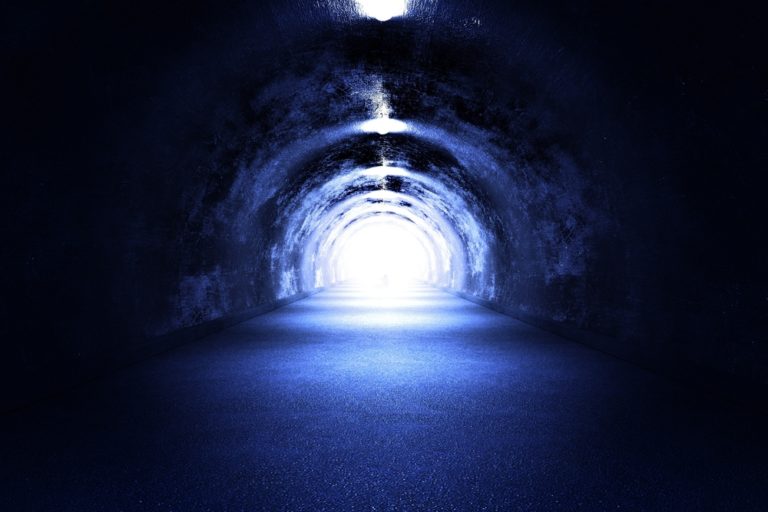 What happens to us after death?

One certainty in life is that we all die. But what’s not so certain is what happens after the curtains come down. Asking ‘is there life after death?’ is a question that we’ve asked ourselves since before the dawn of recorded history.

As humans we have often consoled ourselves that our passing from this life is on to something better, or perhaps more of the same. Religious beliefs are almost all focused around our conduct in this life to achieve a better placing after our deaths. But is there any evidence to support beliefs of life after death?

Beliefs about life after death

The main Eastern religions, by which I mean Buddhism and Hinduism are well known for their belief in karma. Under karmic principles, we are trapped in an endless cycle of death and rebirth, which we can only escape from by achieving enlightenment. The belief is that for most of us this is best attained through good deeds and accumulating ‘good karma’.

This death and rebirth are known as reincarnation, and the Buddhist image of the karmic cycle and rebirth has been embraced widely in the west, even by those who don’t necessarily follow Buddhism or Eastern religions.

It’s worth noting that in the scriptures for Hinduism and Buddhism, there is no specific mention of life after death, but there is reference to the body returning to nature.

Pre-Buddhist Chinese religions believed in a land of the ancestors, where you would enter on your death. Today there are still rituals designed to appease and communicate with long passed ancestors in China and many other Asian nations.

Western, or Abrahamic religions such as Christianity, Judaism and Islam all believe that a life dedicated to serving God means entry to an afterlife. In general, the Bible, Qu’ran and the Jewish scriptures all focus on the return of our souls to God, in one form or another.

Modern interpretations have focused on the concepts of heaven and hell, but these are not mentioned in the original scriptures. In fact, the modern image of eternal damnation in hell, or a life of luxuriant pleasure in heaven is a relatively recent addition to the concept of afterlife. Some credit this to Dante’s Divine Comedy, a tale of redemption through the various levels of the afterlife, taking in heaven, purgatory and hell.

Although the image of the eternal fires of hell is one that has enabled evangelists to sell their brand of redemption, it’s unlikely that this is a true image of the afterlife.

Reports of tunnels with a light at the end, angelic figures or familiar faces waiting in the wings, out of body experiences and being able to see your own body at the moment of death are all common themes.

One particularly lucid report by neurosurgeon and author Dr. Eben Alexander puts many of these near-death experiences in order. By falling into a coma for seven days, Dr Alexander was effectively dead and claims to have seen first-hand what awaits us after death.

In his experience, Dr Alexander conveys the sensation of floating among clouds in a place where higher beings accompany you. He explains how normal earthly explanations feel tame here, where colours, sounds and verbal communication take on a whole new dimension.

Whilst in this state, Dr Alexander explained that he was able to understand that there is something bigger than all of us, and beyond our comprehension. Of course, this is something that anyone who has been brought up in a religious or spiritual environment would already claim to know. But, the experience of seeing this up close and in person is something that is rare and unique.

These sensations are experienced almost universally by those having near death experiences, from India to the USA.

So, is there a clearer indication that there is life after death than those who have been on death’s door? Is there a clearer way to see beyond our own realm than to physically leave our bodies only to return again?

Perhaps another way to understand is to talk to people who have literally come through the entire process and out the other side again. But is this possible? And is reincarnation real?

The concept of reincarnation is one that is found mostly in Buddhism and Hinduism, but also has its roots in older customs and spiritual understanding. But in our age of research and proof, there are people who have been able to document the memories of people who claim to have lived past lives.

In fact, the phenomena of people remembering their past lives is not as uncommon as you might think. It’s normally children who state that they can remember being someone else, and who then go on to provide alarmingly accurate details about these past lives, even though they would have no way to do so.

In 2015, it was reported that a young boy from the USA, named Ryan, had told his mother that he had once been someone else. He had then gone on to detail that he had once lived on a street with ‘Rock’ in the name, that he had used to meet famous Hollywood movie stars and that he used to travel overseas.

At first, his mom saw this as the fantasies of a child and thought little of it. But, increasingly, Ryan added details that she thought must be beyond the capacity for a child to invent, let alone a child with no prior knowledge of the era or part of the world he was talking about.

Ryan’s mom started to check books out of the local library to see if any of it would jog his memory some more, and one day Ryan saw a picture and said, ‘That’s me!’

The photo was of a man named Marty Martyn, an otherwise unassuming film extra from the 1930s. Martyn was a Hollywood extra who went on to open his own talent agency, danced in Broadway musicals and travelled overseas to Paris, all facts that Ryan had regaled as a child. And, as if to cement the fact that something very real was happening here, it also transpired that Martyn lived on Roxbury Drive in Los Angeles.

Ryan’s case is just one of thousands that have been studied since the 1960s. In fact, most memories of past lives are from young children, who tend to lose the details as they grow older. The past lives are also of relatively obscure people and, perhaps tellingly, are often from people who died traumatic deaths, either sudden or violent.

The research was conducted by two child psychologists between 1961 and 2007, and is published in a book by Dr Jim Tucker called Return to Life.

Does that show that life after death is an unassailable fact? Well, it certainly shows that there either a strong bond between children and the spirit world, or that reincarnation is indeed a real thing.

So, what will happen to me after my death?

Of course, no one can say with certainty that there is life after death. But as we’ve seen, there have been experiences and encounters that can make it hard to deny. The arguments for and against are hard to detail in a blog post as short as this, and sceptics will always find a counter argument.

I believe that there is a spiritual side to the world that we don’t yet understand or is perhaps beyond our limits of comprehension. In this respect, if there is life after death is likely something that we will never fully understand until we pass beyond this physical realm.

But with so many cultures, similar experiences and a growing bank of research showing that there is more to these claims than meets the eye, perhaps we can rest easy in the knowledge that there is something fantastic waiting for us beyond the grave.